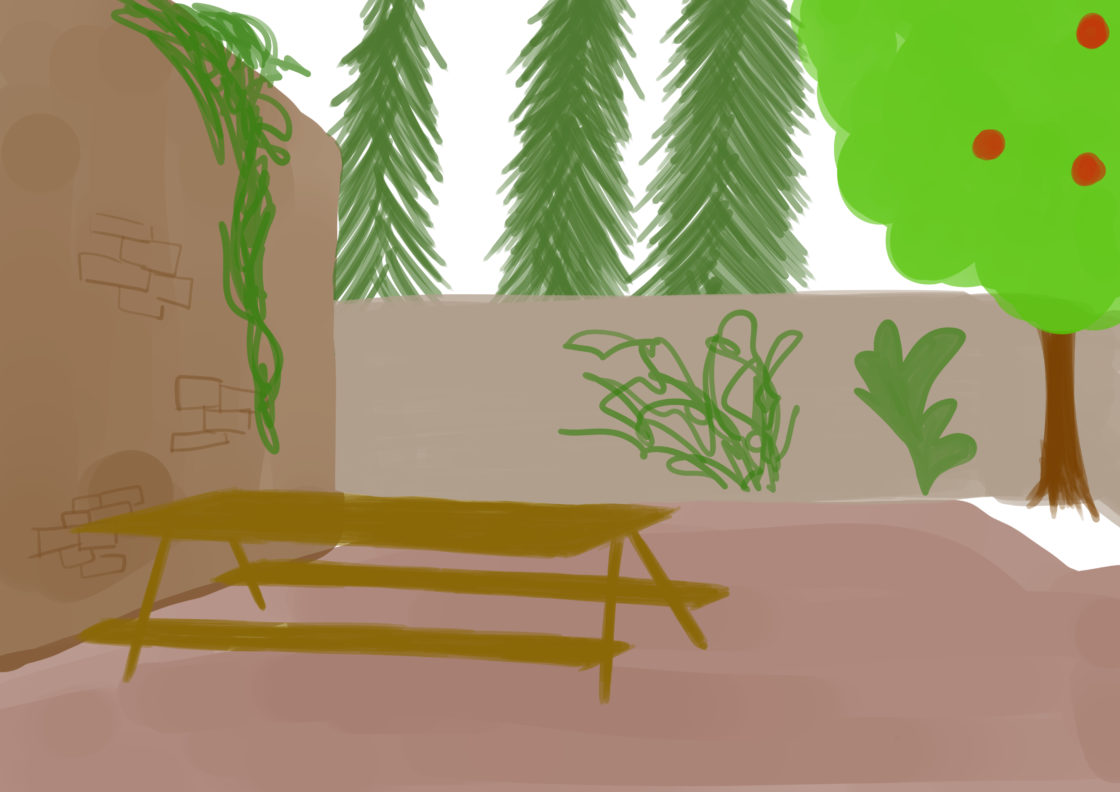 Ida is next to my mother the most important woman in my life. She is a friend of my parents. In the beginning I knew little of her. The only memory I had of her and Marcel goes back a long time and I still remember only a fraction. I remember that I was allowed to draw on the window.

If you’re curious about who this woman is, you can look at this illustration.

I was a couple weeks in my study to become a teacher of arts. I lived with my parents and twice a week I got up at six in the morning to be at the academy in time. Not my favourite thing to do.

During a party that my parents threw I saw Ida and Marcel. My mother told me to talk to Ida because maybe I could stay with them every now and then. I approached a woman I barely knew to ask if I could stay with them twice a week.
A short while later I rang at her doorstep and a new chapter of my life started.

On Tuesday and Thursday I had to be at the academy by nine o’clock. So every monday I packed my bag for two days. After the classes I walked a couple of streets further, to the backyard of Ida en Marcel. Then we sat outside, drank a speciality beer while Marcel cooked the most amazing dinner. Meanwhile Ida and I started to talk. Talking like you would do with your mother at the kitchen table: How was your day? What are your obstacles in life?

I always find it hard to talk about how I feel but with Ida I didn’t seem to have a choice. This is not in a bad way, by the way. This happened very naturally.

During dinner we usually opened up a bottle of wine and after dinner we drank tea. Sometimes I studied the history of art. Then I went to bed in the guestroom. The next morning I was usually alone. Ida was still in bed or already gone for work. Marcel had already left on his bike or I saw him just before he went as I made myself a cup of tea. Then I ate my breakfast and walked to the academy. From that moment on the Tuesday and Thursday mornings didn’t feel like early mornings but like sleep-in mornings.

After a few months I found a room in Utrecht and the contact I had with Ida en Marcel was crumbeling down. I was busy with my studies and I didn’t take the time to sit down anymore. I got overstrained.

Ida offered me to come by for dinner. We had a good talk, as usual. We agreed to see each other more often. That’s why I came by every monday evening to for dinner again. The same ritual started. We sat outside, we drank a beer, we had dinner and a bottle of wine. After dinner we drank tea and then I went home again.

Ida is a miracle. She has meant so much for me and I hope I can give that back to her. Partially through this post but a lot more in the years to come at her home.

The edible garden – art by Marieke

I was allowed to make a piece of art for a bed and breakfast in Wageningen. It is a beautiful Bed and Breakfast. The building is renovated wonderfully by the owners. And there’s amazing art displayed. They have a beautiful modern kitchen. They give cooking workshops here. The next step is an edible garden.

After a tour through the entire villa and a divine dinner, we had a conversation about what the owners expect. I got the assignment to make a piece of art for the Tuinkamer – the garden room. This room has a view on the edible garden. What kind of art I would make was up to me. Of course I let myself be inspired by the edible garden. From this room there is a great view on the kitchen garden.

I draw the earth with different vegetables in it and in the background a some very Dutch clouds.

If you would like to see my work in real life, I suggest you pay a visit to Villa Arion. Stay a night in one of their beautiful suits or enjoy a cooking workshop!

As soon as my work hangs in the villa, it’ll be visible here on the website. Until then: sneakpreviews only! 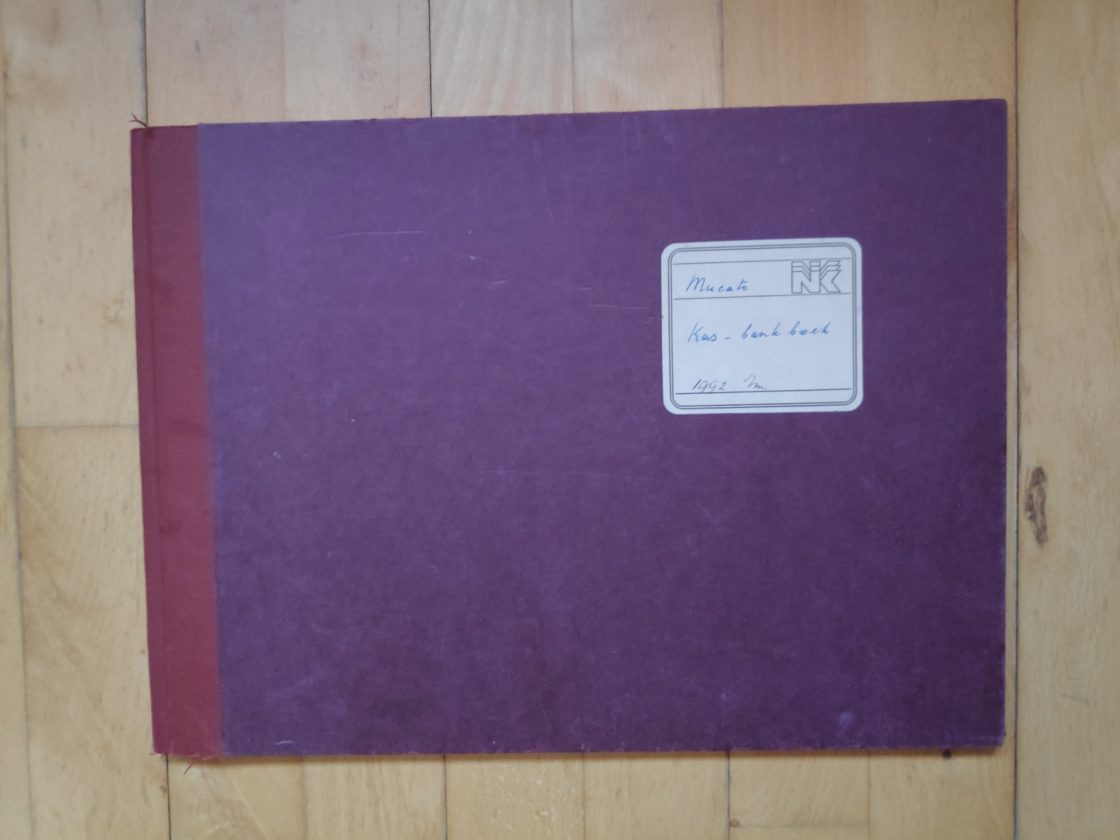 Today I worked for several hours on understanding my own accountancy.
As you know I started this company on July the first. And if you have a company, you need to pay your taxes and your VATs. And I have zero knowledge of them.

Some of you know that I’m no hero with numbers. I don’t even know for sure if 1 + 1 is actually 2. That is why I wasn’t looking forward to the accountancy part of my company.

I tried to avoid doing this part but I can’t do that forever and the time has come now that I need to know what I’m doing and should be doing.

My dad is a clever man with a couple spare hours on a saturday afternoon. So there I went: armed with my laptop and some courage. My dad is a practical man and we think alike. The best way to understand something is to look at a simple version of it. He is the paymaster of theater group Mucato and took the accountancy from this theater group from 1992 out of the attic. This book is older than I am. There were all these loose words and numbers written down on the paper in a beautiful handwriting. On the basis of this book my father explained to me what ledgers are, how I can use them and this made me think about the ledgers I need for my company.

Together we had no idea how my accountancy programme works so the bigger part of the afternoon we were trying to figure this one out until we both had a pretty good idea of how it works.

And now, miraculously, I dare to say that I understand how to keep my accountancy accurate. And that is right on time, because it is almost time to pay some the VATs for the third quarter of the year.

Thank you for your help, dad! In Doetinchem was a workshop action-reaction chain on the fourth of september. Me and three co workers from Kleinkunstig and some nice people from a youth centre were hired by the Zone.College in Doetinchem to give this workshop to five classes at the same time. We had a rough start but after that it was an amazing day! Let me tell you how it went:

I arrived at the location that I was told to go to. There was no workshop planned there. The dear reception ladies told me that I might needed to go to a different location and gave me some directions on how to get there. It was one street away so it wasn’t hard. Once I was there it became unclear whether the workshop was given there or at a third location on the other side of the city. I started to get a little stressed by now because I was the coördinator of this day so I didn’t want to arrive too late. At this time some people, who were too old to be students at this school, were standing behind me. We started to talk and they turned out to be the people who were going to help us out from the third location. So they confirmed that the workshop was definitely on this location.

Then there was the next dilemma. We were told to put all our materials in one small classroom but this wasn’t big enough to have the workshop with five classes at the same time. It was even a little too small for a workshop for one class. A lady came to help us: “You can use a classroom that’s not in use at the moment!” But this one wasn’t big enough either. I wanted to use the canteen. Eventually we got there but in the following way: unused classroom, outside (the wind was blowing too hard so it wasn’t possible to do the workshop outside), canteen, gym, canteen.

There I gave a short introduction on what an action-reaction chain is and what we were going to do today. Then the kids started building. It was wonderful to see them busy. The kids were very creative with the materials we had given them and thought of a lot ways to build the chain.

In my instructions I wasn’t clear enough about the fact that we were building one big chain instead of 400 small chains so this took a little extra creativity at the end. Eventually they managed to link almost all the chains together! Some parts of the chain were built a little better that others but all the kids had a ton of fun building it and getting to know each other. And in my opinion, in a first week of a first year of a new school, that’s the most important part.

After the action-reaction chain was done, the kids put everything back in the boxes they found their stuff in and went on to grab some lunch somewhere. And for us the next 5 classes were waiting already!

This round went a lot better. We as teachers knew better what to do and what to say. We knew what went wrong the first time around so we made some small changes: we made 5 workspaces, one for each class. And we decided in what height the groupes could work. So the starting group, group number one, startet at 3 metres high and went down to 2. The second went from 2 to 1.5, all the way to group number 5 from 0.5 to the floor.

This chain went better than the first one and the kids were working together rather than working on their own little piece of chain. At the end all the kids joined around the action-reaction chain and counted down to see it in action. It was beautiful to see how these classes formed a group. Just like the first round, these kids put everything back into the boxes again and then they were allowed to go.

When the canteen was kids free again, we had some time to discuss how the day went. During this time we were busy putting the blocks with the blocks, all the marbles in a bag. Everything was cleaned up nicely so that it would fit easily in my car again. A lot of the materials were modified for the chain so they had become unusable. We could throw a lot of materials away which gave me enough space in the car to give one of my colleagues a lift to Zwolle.

I learned a lot from this workshop day and I’m looking forward to the next!