Intentions for the Christmas vacations

My Christmas vacations takes up two weeks. Two weeks of no workshops. I should keep myself busy in another way. First a couple days filled with the birthday of Joek and the two Christmas days we have here in the Netherlands.
Then it’s time to start working for a bit again. I was going to stay at Joeks place until after new years eve. I would have all the time in the world to work on the book I’m illustrating. When I would have drawn everything to my liking, the vacationdays would be over and I could start giving workshops again.

A couple of weeks back, I wrote about the new book I’m illustrating. I got two chapters of this book at home. Each chapter has 13 little chapters. Every little chapter is only one page long. The other page has space for my illustrations.

The book is about how to battle a depression; a subject that is very close to me. I’m honoured to be illustrating this book.

I got the text on paper. In this paper version I drew the sketches. I started a few on my laptop as well to make them into a digital illustration, like I always do.

The Christmas vacations so far

I enjoyed Joeks birthday and the two Christmas days with family. I had all the time I wanted to catch up with members of the family during some lovely meals. The first day, my brother coocked. The second day the preperations were done by all of Joeks family.

After these festive days Joek had to go back to work until new years eve. We’re going to celebrate new years eve in Diever and watch the carbid shootings.
Since Joek started working again, I feel the need and want to start working as well.

In good spirits I got up and grabbed my laptop. It didn’t power up, the battery was too low. That happens, that’s why we have chargers. Right? Where was my charger? I forgot to bring my charger. It’s still in Haarlem while I’m staying in Zwolle this week. Now I can’t do anything but take the vacation.

What to do now?

Somehow it’s a good thing I can’t use my laptop because I actually have to take the vacation. I can write a blog on Joeks laptop. And if I get desperate, even on my phone.

Luckily I got a wonderful book from Joeks sister: Nice girls don’t get the corner office, written by Lois P. Frankel. Now I’ve got all the time to read.

And I’ve got two more days to make a tax return. So thank god, there is still some work to do. Even if I can’t work on the illustrations for the book. 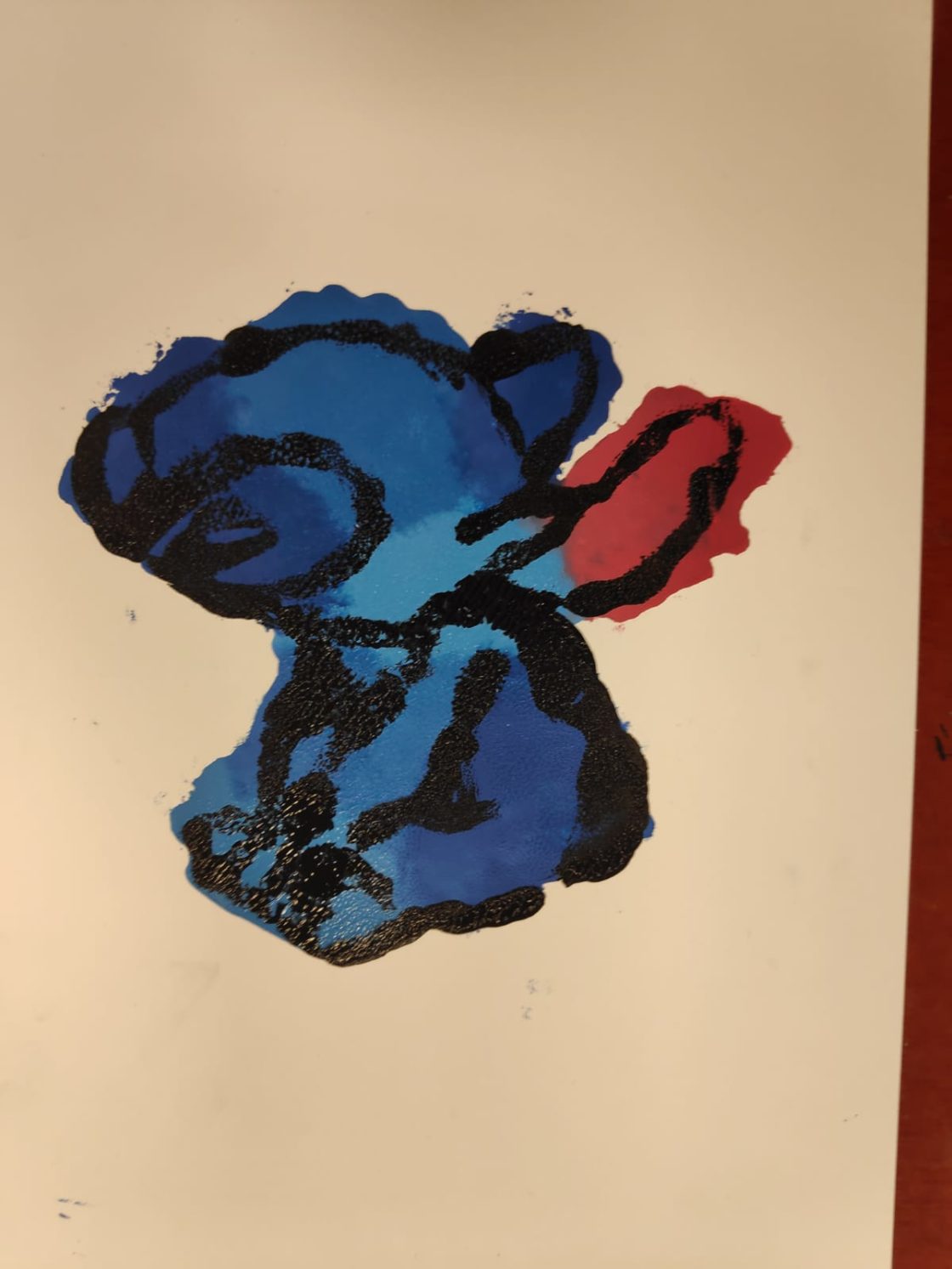 Last Thursday, on Joeks birthday, you could find me in Bemmel. I’m from Haarlem and my topographic skills are nonexistent. Although it’s getting better thanks to all the workshops I give throughout the country!

Bemmel is located – for those who are as good at knowing places as I am – near Arnhem. Quite the drive from Haarlem. Luckily I didn’t have to start until noon at the school so I didn’t have to get up early.

Before the workshop started

I arrived a few minutes before noon at the school and I was brought to the classroom where I was needed for the workshop. A lady approached me. She was the teacher who was going to join me in the classroom. We started to talk and it turned out that we did the same study. We both know a couple of teachers and a fellow student of hers was a teacher of mine.

It felt good to chat with her because we are like-minded about the art academy. We are both very happy we went there, because it made us a good teacher. But we also have a couple things to say about how things should or could be different.

In Bemmel I gave the workshop Monotype. I am expected to make the prints on bags but I don’t like those results that much. I rather give them the choice to work on paper and explain them why I personally prefer printing on paper. A couple of kids chose to print on the bags and made some very pretty prints!

The kids went to work. First they thought of and sketched out a design and then they printed a trial version on regular paper. Some discovered they used to little ink, some found out it was too much.

The nice thing about this day was that I could work with these kids for two hours with a little break in between. The kids had the time to eat a little and it gave me the oppertunity to organize the workshop a bit better.
There was a clear moment to start with the real deal, the endresult: after the break.

The kids fixed what they figured went wrong in their trial version. Some used more ink, others a little less. Some worked more with colour areas, others made their design a little sharper.

They made very creative pieces of art. All of them on their own level. A guy who found it a difficult technique made a simple design and that worked out well! He could tell me clearly what went better in the trial version and what was better in the endresult. If he had more time, he would have made a perfect monotype.

A girl made a design which was a bit hard in my opinion but it came out better than I could have imagened. Eventually she chose to let it go completely and started experimenting with colours and ink. She made a beautiful background or abstract work.

On the other side of the classroom a girl wondered if she had to print everything at once or if she could print twice on the same place. Obviously she choce to do the last. First she printed the colours, then she printed the lines over that. It had a nice feeling to it and worked realy well.

Two ladies worked on the effect of making ink stains. Both made a pretty and well made result. One of them chose to use extra tools. First a paintbrush but she didn’t like the effect for what she tried to make. When I told her the ink is waterbased, she chose to use a dish cloth.

Next to the text you see a couple of pictures of what they made. 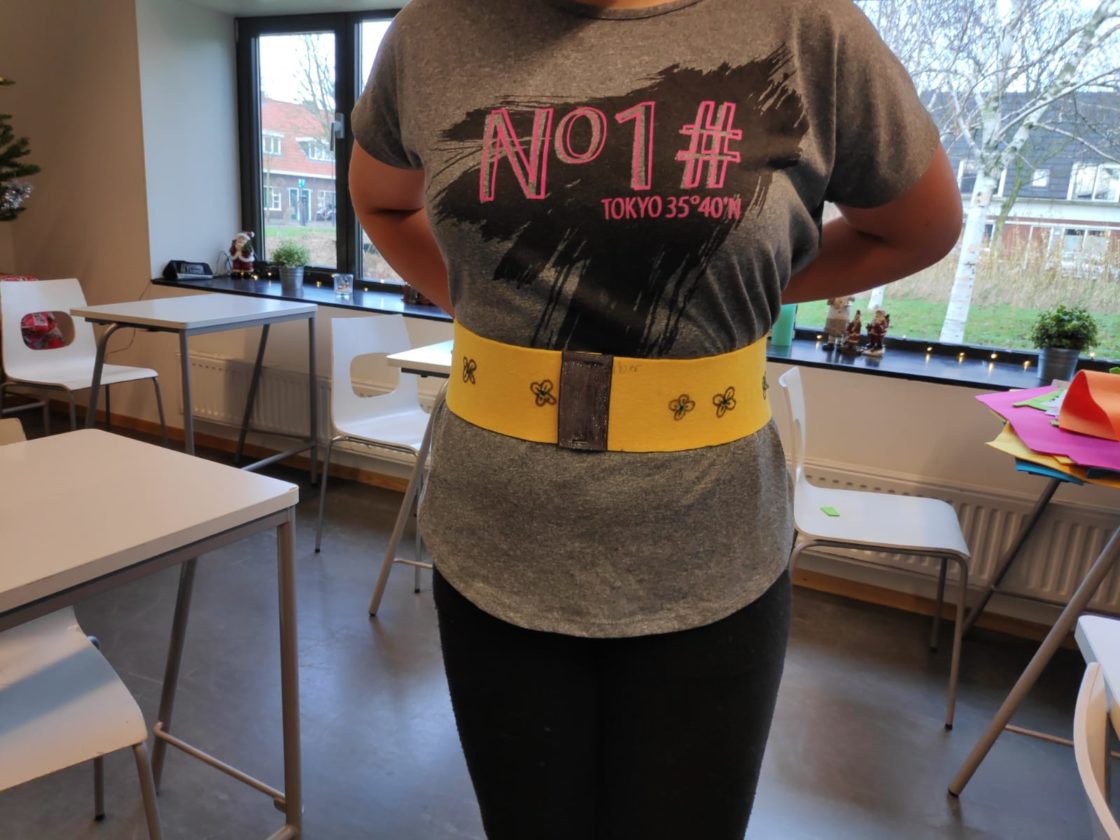 The last five weeks I gave a series of one workshop in Leiden: wearables. Wearables are wearable technology, like smartwatches, heated vests, headphones, etcetera. I teach the kids the basics: how to make a circuit and how to let a little light light up with this circuit.

In Leiden I had a small group of seven kids. Together we made a circuit on paper with an LED ligth, a battery and copper tape. Then, with the same ingredients on a piece of felt, we made a bracelet. After that the kids started on their own design.

Two guys wanted to make a sort of speedo. I didn’t see the point of having a LED light on your underwear, so they made one to put over your pants.
The speedo is made out of yellow felt, on the front burns a little blue ligth. On the inside, on the butt, is the battery located. They could have put it right next to the ligth but they thought it would be funnier to put it on the butt.

The last day they used their time to decorate their underwear with needle, thread and orange felt. They made a giant penis.

Two ladies wanted to make a belt. They measured the width and length neatly. It couldn’t be taken out of one piece of felt so they cut off two pieces and sowed them together. Then they started with adding a lot of little LED lights. After they put the circuit and the lights together they found out they both made a mistake somewhere. And they couldn’t get it right. I helped them check multiple times and I could not find the mistake either. The only option there was left was taking it all out and start over with adding the lights.

Two gentlemen wanted to make a balaclava. I didn’t have any black felt so they made a bright orange one. First they picked up one of their own caps to look how it’s made. Then they measured their heads and drew their balaclava cap on the felt.

They worked together nicely. They switched after they did a little piece of cutting or sowing. They checked together how the light should be attached and where the battery should go. The cap works splendidly!

A young lady wanted to make her own diadem. She drew a good sketch of how big it should be, how many lights she wanted and where. She cut off a piece of blue felt and went to work. First she drew where everything had to go: the lights, the battery, the copper tape and the iron wire.
Unfortunately she was sick on the last day and didn’t have the time to finish it.

Multiple pictures were made. Pictures of all the seperate works but a group one as well. That last one I would love to post here but I haven’t recieved it yet. There are multiple pictures of the workshop Wearables on my Instagram, just not all of them from Leiden. 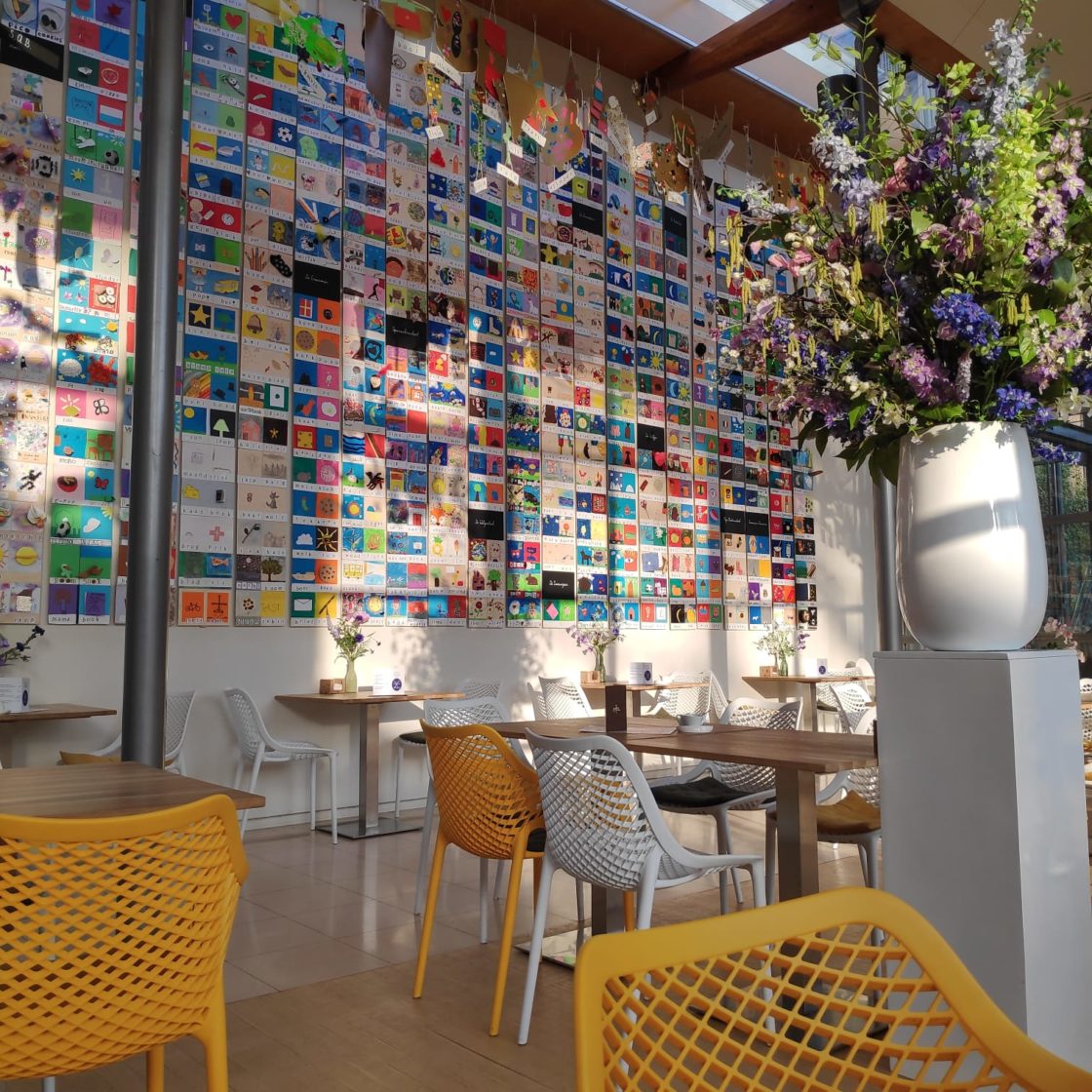 Museum teacher – why do I want to know?

A few weeks back I wrote about Tin Figure museum in this blog. In that museum I spoke with Harry about the education program and how I might be able to improve it. I have a few ideas but I have no experience working for or with a museum.

Because I have no experience in working for a museum, I wanted to talk to someone who has. So I send an email to Teylers Museum in Haarlem and asked if I could talk to the one who’s in charge of the education program. Apparently I could because a short while later I got an email back from Fieke Kroon. She agreed to see me on the 5th of December at 11 o’clock in the museum.

A chat in Teylers museum

We met in the cafe. I sat there with a cup of tea, a few questions and a notebook. A lady walked up to me and asked if I’m Marieke Noordhuis. We talked about who I am and why I emaild her. I explained that I used to be a teacher, I now have my own company, I give workshops and maybe I’ll be working with the Tin Figures museum in the future.

Then I could ask her my questions. When she answered one of my questions she also answered a few others. So in no time it became clear to me how I should approach the task of making and finetuning an educational program. She told me I could always come and seek her help if I needed to.

After answering all my questions, Fieke had a question for me too; Would I like to work as a substitute workshop leader for Teylers? Of course I want to! What an offer. This is just steps away from my house. I did tell her that I plan on moving to Zwolle. She is going to figure out if I can get travel allowance.

What an hour! At 12 o’clock I stepped through the door of my house with a lot of extra knowledge and a new client.