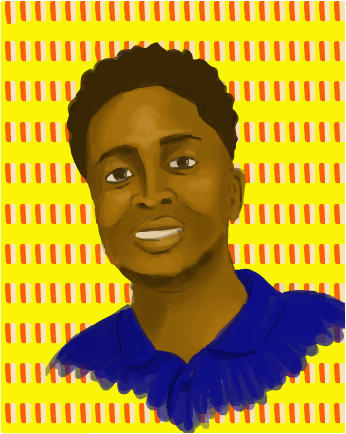 Kofi Boateng is a driven young man. He asked me to make an invitation. Kofi is almost graduating as a doctor and is almost turning 30. So Monday the 12th of August at 1 o’clock we saw each other at Amsterdam Bijlmer station.

I asked Kofi Boateng to take me to a place that means a lot to him. He grew up in the Bijlmer and that’s why we met there.

First we handled the business part: what do you want? What can I do for you…? I made a few small sketches to create an image and we thought about whether it was going to be a digital invitation or on paper, or if it had to be good enough for both and how I should handle it.

Then the fun part began: Kofi Boateng took me for a walk through the Bijlmer. We talked about his childhood, where he grew up, about is family, about the Bijlmer itself. We walked from the station to the Anton de Komplein, via the Bijlmerpark theatre through his old neighbourhood back to the station again.

Kofi Boateng told me about his ambitions to become a doctor and what he wants to achieve with it. Kofi never saw a coloured doctor when he grew up and he wants to change that for the future. He wants to show that it doesn’t matter what your background is, you can become anything you want to.
Kofi Boateng is a Ghanaian young man with an incredibly big heart for his community and his roots. He wants to go to Ghana annually to pass on what he learned to his tribe: the Ashanti.

And I can summarize all this in one single image for his invitation for his graduation party and thirtieth birthday. What an honour to work with such a beautiful person. And that while I’m learning so much at the same time about the norms and values of the Ashanti tribe!