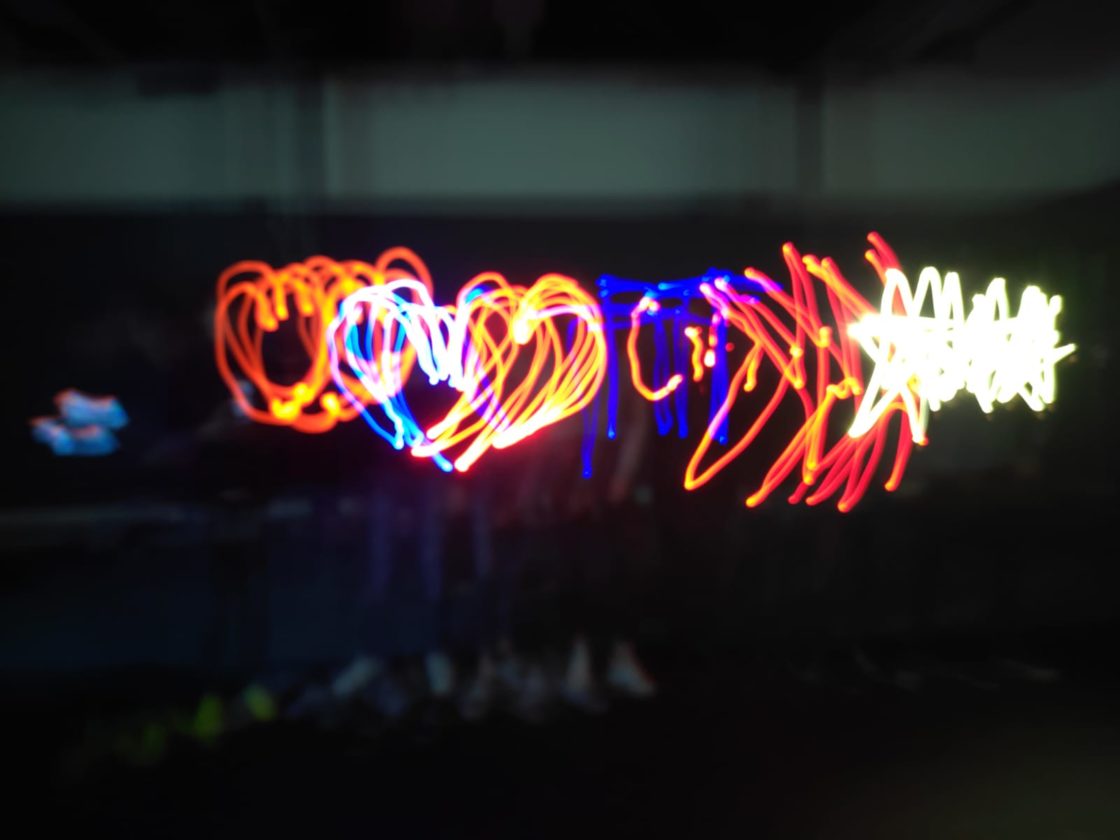 What is Light graffiti

Before I explain how awesome this workshop was, I’ll explain what light graffiti is.

It’s a form of art, light art and photography. By giving the camera a long shutter speed, the camera takes in more light. If you adjust the shutter speed like that, taking a photo takes multiple seconds so there is enough time to make a drawing with light in the air.

To make sure the drawing comes out nice on the picture, it is necessary to take the pictures in a dark room.

I’ve given and written about this workshop multiple times, the wearables. Last thursday I gave this workshop again. This time to 4 vwo at the Alfrink college in Zoetermeer. The nice thing about this age and level of thinking is that they can think well for themselves.

First the kids made a circuit on paper to get into the idea of letting a light burn. Then we all started to build up the bracelet.
Previous times I had only one hour to do the workshop. Then there is just enough or just not enough time to get everything to work nicely.
At the Alfrink college I had two hours times. I used one and a half hours to make the bracelets.

Normally I would tell the kids exactly what they should do to get the bracelet work as fast as possible. But normally I teach kids who aren’t older than fourteen and they usually don’t have vwo level of thinking.

I wanted to use their brain so I let them figure out the last step of the circuit by themselves. Some worked it out perfectly, others needed some guidance. I told them how I would do it but I let them still choose their own path.

After one and a half hours all the bracelets worked. Then right after I noticed that, one stopped working. And one guy wanted to make his bracelet work even better. The result was that it didn’t work at all, unfortunately.

All the kids joined me in a classroom that could be darkened completely. Everyone joined for a group photo, everybody worked on the light graffiti pieces.

After the group session, a couple of kids wanted to go alone or in small groups to make some more light graffiti. The more they tried, the more creative they became. Unfortunately some bracelets decided it was time to stop working.

This was the first time the school made sure there was a classroom that could be darkened and that I had plenty of time left in the workshop to make the light graffiti.

The light graffiti really makes the difference for the workshop and gives the bracelets a purpose. The other times I could teach the kids something new and some kids really made a pretty bracelet. But the workshop gets a lot better if there is time to play around with light graffiti.

The pictures you see are a selection of the pictures we made during the workshop.