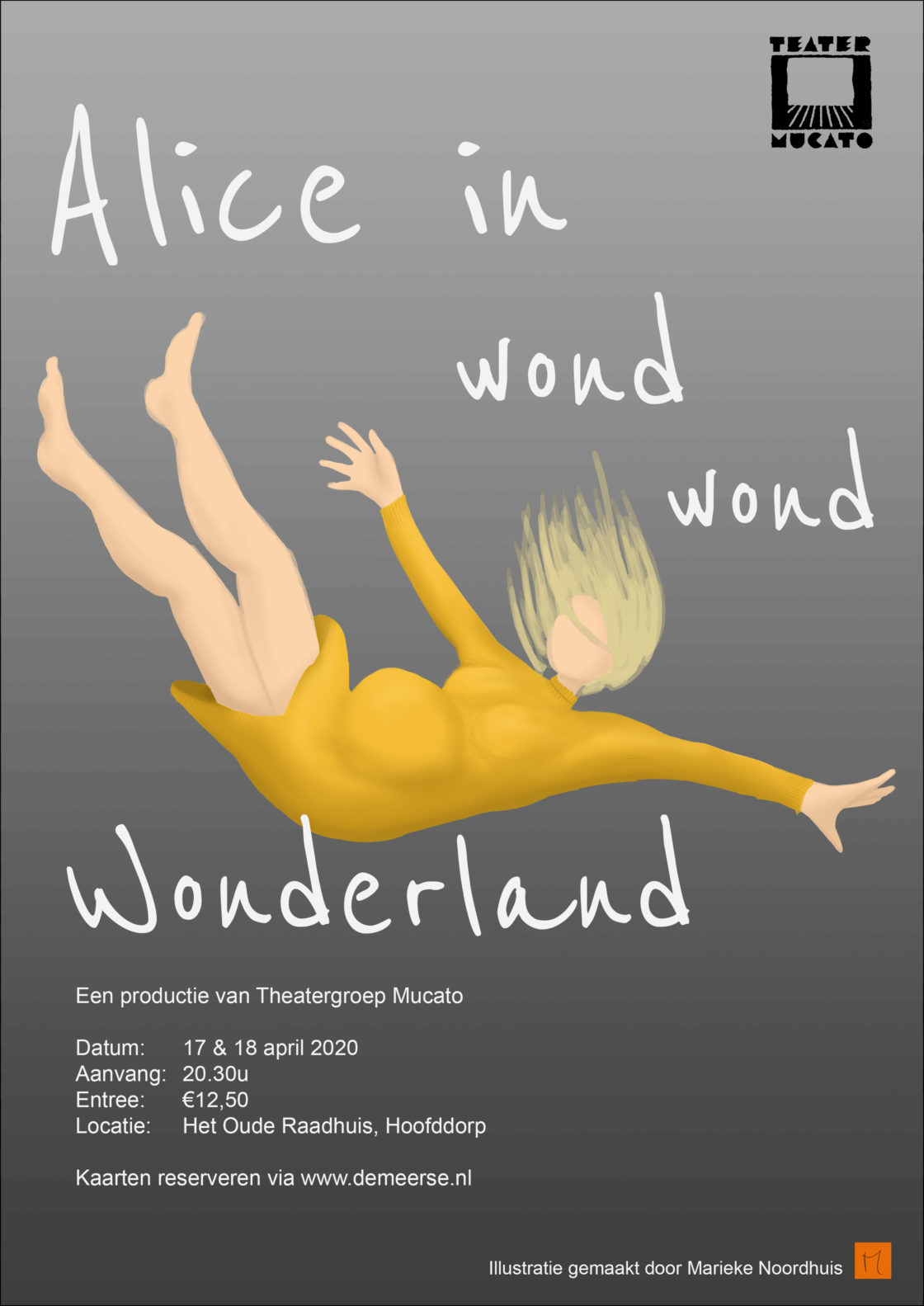 A couple months ago I wrote about my dad and the theatre group Mucato. He is their paymaster.

At least once a year they perform a play in theatre in Hoofddorp. Last year they played ‘De Jossen’. My dad had asked me if he could use one of my artworks. You can see the poster here.

I offered to make the next poster. That is why my father asked me a couple of weeks back if I still wanted to do so. Of course I said yes.

This year on the 17th and 18th of April, they play ‘Alice in wond wond wonderland’. This is a play about Alice in Wonderland and the horrible things that happened around Josef Fritzl.

For those who don’t know about that: Fritzl locked his daughter up in the basement for years and got a couple of kids with her.

In this play you get a peak into her world. For that, parts of the story of Alice in Wonderland is used.

The beginning of the poster

Some time ago, I watched a documentairy on Netflix about the case of Fritzl. I saw the room this girl has lived for so many years. I read the script as well. It is written very lively and paints a good picture of what her life looked like. It tells you about the feeling of falling through a concrete shaft.
I remember the heavy doors and concrete walls which lead to the room where the girl was locked away.

This image, together with the script, gave me the idea of the poster.

What can you see on the poster?

The feeling of falling was my inspiration for the poster. The background is gray, from light to darker. As if the woman is falling through a concrete shaft to a dark room.

There is a pregnant woman without a face. The fact that she doesn’t have a face makes her almost anonimous, forgotten. The pregnant belly refers to the kids she had in the soundproof basement.

The woman is wearing a yellow dress. This wasn’t the case in the original design. I gave her a light blue dress, like Alice in Alice in Wonderland.
But then I heard that the Alice on stage is going to wear a different kind of dress. To give the audiance a piece of recognision, I chose to draw the dress that is going to be used on stage.

The font for the title is Reenie Beanie. I gave the theatre group Mucato a few fonts to choose from.
All of them were kind of childlike handwritings.
When this girl was locked up, she was about seven years old. She was taught to write before she ‘dissapeared’. With this font I wanted to show that time stopped for her. As if she would still write like a child years after her dissapearance.

It was wonderful to have this much freedom in the design. I had a few ideas and made the strongest idea into a poster. It felt good to have the freedom in colours and forms. Obviously the text was already thought of but I could play around with the fonts.

What a cool assignment to get and I feel honourd to see my work on multiple places in a few weeks!

Thanks to Theatre group Mucato and especially to my dad for giving me this assignment!